Brian was born August 17th, 1960. He is the proud father of 3, and grandfather of 5, including one set of quadruplets. He loves camping, fishing, gold prospecting, horseback riding, cooking, family, and…beer! “I dream of retiring on a small family farm, or spending more time in Mexico on the beach”, he says. “I someday would like to become a hydroplane driver, or at least be part of a race-boat crew.” 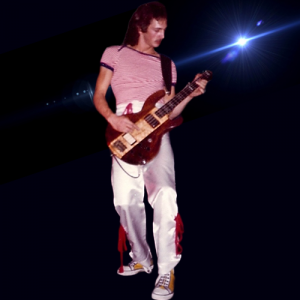 Brian’s musical influences are diverse, ranging from Chicago, to The Doobie Bothers, to Rush. His favorite artists also span a wide variety, such as Metallica, Steve Vai, Tool, Mother Love Bone, and Jason Aldean. Although nobody remembers for sure just why, the other guys in the band have called him “The Rope-Man” since about 1980.

“I remember being very young,” says Brian, “…playing in the yard at a friend’s house and hearing my first live rock band. They were practicing in a basement across the street and I was completely mesmerized. The power and punch that emanated from that basement shook the ground, and kids of all ages were coming from all over to sit on the lawn & listen. I was hooked. After that I made sure to go to every Jr High dance or other event that included a live band, mostly just to watch and listen. I bought an electric guitar from a friend for $25 and 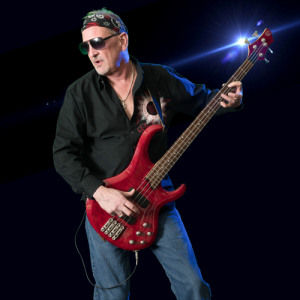 tried to learn. It was tough. Once I got into high school it seemed like everyone was a guitarist or a drummer, but there were zero bass players. That’s when I talked my mom into renting a Fender P-bass and I enrolled in private lessons. I seemed to pick the bass up pretty quickly and spent hours learning songs from vinyl records until I was able to play in a garage band.” “All in all, music has been one of the best experiences of my life. The energy and connection you get with a live audience is like nothing else in this world. When things are right, you are one with all of them, you feel like part of the same being. You are both experiencing the same feelings and feeding exponentially off of each other’s emotions and appreciation.”