Doug is one one of, if not the very first, founding members of “Archer”. He is one of only 3 that go back to the original band, “Mainline”. Although he doesn’t like it much, his bandmates have called him “The Evil Red One” for many, many years. It all started with his blazing red afro back in the late 70’s. We have the pictures!

Before an illness later in the 80’s caused him to leave, Doug was the musical director of the band…almost single-handedly responsible for the 4-part harmonies that made them so successful. 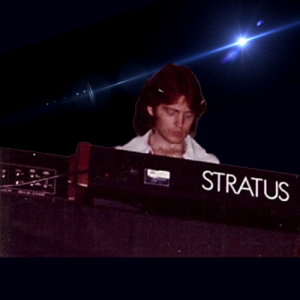 As an accomplished singer, keyboardist and tolerable guitarist, Seattle-born Doug has Grandma to thank for giving his family her old 1930s Wurlitzer spinet upright piano. As a young teen, he taught himself to play piano songs from Chicago, Elton John, and others at his home in Mountlake Terrace, Wash. After high school graduation, he formed a band called “Renegade” with his friends Scott Wade (Jaggies), Steve Wiederhold (Tad), and a raw, fledgling punk-Jimi Hendrix style sound was born. In 1979, he met Lead Singer/Guitarist Martin Smith, and created a band that eventually became Archer. From 1979 to 1984, they were a booked solid staple band on the Pacific Northwest music scene…and yes, the Spinet piano still traveled with him everywhere, including up narrow steps on Washington State Ferries. When Doug

was struck by a recurring childhood illness that required emergency surgery, he left the band and went off to college – WWU for a Bachelor’s Degree and Seattle U for his Masters. After a few years as a newspaper reporter, he went into government, working 21 years as spokesman for the City of Marysville. He never stopped playing, though, and has built a backlog of original music. In the early 2000s, he played with cover bands “Primary Colors” and “2nd Nature”, satisfying his itch for modern alternative-funk and dance music. While reunited with his bandmates from Archer, he also plays in a cover band, Aardvarks Utd. His musical influences tend toward British and Irish groups including U2, The Beatles, The Smiths, Coldplay, Radiohead, and then stateside, Arcade Fire, Red Hot Chili Peppers and Linkin Park.

When he’s not playing music, Doug’s a distance bicyclist (he also rides a unicycle). He and his wife, Leslie, run a nonprofit organization for dogs and dog parks that hosts the annual Poochapalooza dog festival that draws thousands of people and dogs to their hometown in Marysville, WA, giving dogs the day out they deserve.