“Dad always had a Country Western band,” says Mark, “…and he actually won some contests and went to the Grand Ole’ Opry to play. He gave up his dream for his family. He worked and retired from the Washington State Game Department.”

“I always looked up to my Dad. He always played guitar, and he gave me a guitar one time at 12 years old. He taught me three basic chords: G, C, and D, because you can play any song with just those three chords. He didn’t encourage me; he just let me go on 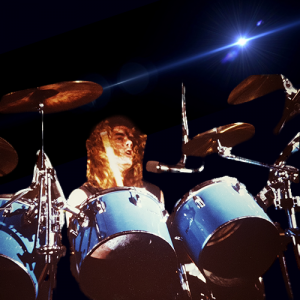 my own path, and I fell in love with music. My Dad was my hero.”

Why did Mark move to playing drums? “My Dad had a drummer with a couple of sons, and they didn’t play drums too well. So, I got interested in drums almost at the same time I started playing bass guitar with my Dad. I wasn’t very good, but when I went to Coupeville High School we had a band room and every lunch hour I would go sit behind the trap drum set and basically teach myself.”

“So I would bring my sack lunch into the band room, sit behind the drums, and practice until I got it right. I did that for 2 or 3 years. One day at 15 my dad said he knew I was trying to learn, and his drummer couldn’t make it.” So he had this nice old champagne pink Gretsch drum set, a 4-piece kit. “Mark, can you cover the drums tonight?” “I was shocked. It was really cool, but he thought I could do it. From then on I was his drummer.” 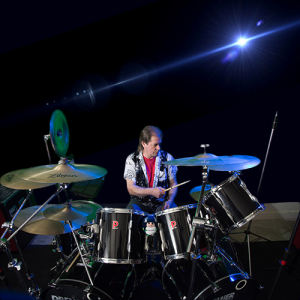 Whitney (bass), and several drummers. He then joined “Airborne”, another successful Seattle band, and stayed until the tragic passing of their lead singer. He joined “Archer” next for several years, and then moved on to play in bands including “Redax”, “Racer”, “Strypes”, “Zero Discipline”, and “Peace Pipe”, including performance tours to Japan and Okinawa.

Mark has been in bands as opening acts for The Tubes, Quarterflash, Trooper, and Nicolette Larson, among others.